On 22nd May 2014 Technip Umbilical Systems, a key client of CDM’s Subsea division,  launched their new Steel Tube Umbilical Manufacturing Facility on the banks of the River Tyne at Wallsend, Newcastle.

The new facility is thought to be the most advanced in the world and is housed in one of Europe’s tallest single storey buildings, purpose built for the new manufacturing carousel.

Technip Umbilical Systems are market leaders in the manufacture of complex umbilical systems for the subsea industry. As a market leader they hold many industry records including the world’s largest and heaviest umbilical manufactured for BP Skarv.

The new facility will create an additional 150 jobs and help safeguard the future of the existing 600 people employed in Newcastle. Technip Umbilical Systems is a wholly-owned subsidiary of Technip, a world leader in project management, engineering and construction for the energy industry, reporting a 2013 turnover of over £9bn.

The VIP opening event attracted numerous dignitaries, clients and senior figures from Technip’s worldwide operations to Tyneside, as well as regional and national press and was overseen by Managing Director of Technip Umbilicals, Jean-Louis Rostaing. The official “switching on” ceremony was orchestrated in dramatic style with the huge rotating carousel starting up to the soundtrack from 2001 Space Odyssey, providing a fittingly futuristic, if tongue in cheek,  feel to the event

CDM’s Director, Mark Bulmer who attended the event said “It’s fantastic to see such an advanced facility launched on Tyneside. Today’s event perfectly showcased the commitment, innovation and vision of Technip’s management and staff.  CDM Recruitment are proud to work with such a global market leader and look forward to supporting the growth and success of Technip Umbilical Systems during this exciting new phase of growth.” 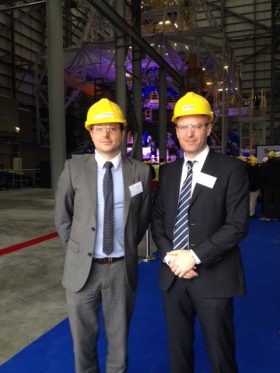